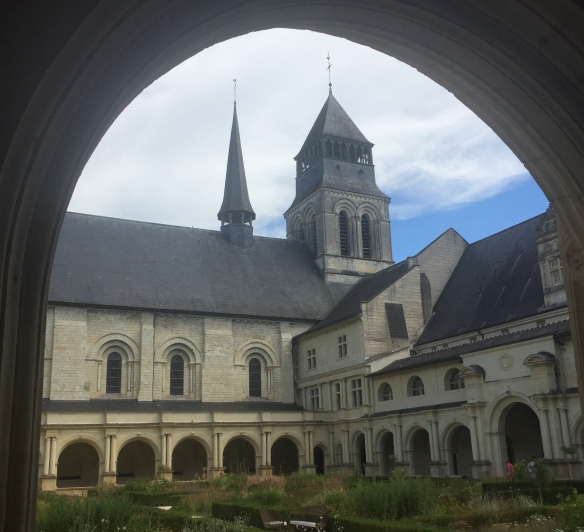 When we went to France in August, we had one day to fill between our arrival at Charles de Gaulle airport and our stay in the Dordogne region (to read about our stay in the Dordogne, click here and here). I had just read a fascinating trilogy about Eleanor of Aquitaine, so we decided to spend our free day at The Royal Abbey of Fontevraud.

**Historical fiction is one of my favorite genres – reading about a place before visiting brings it to life for me. Anyone else out there feel the same? What are some of the best historical fiction books you’ve read recently?**

We only booked our flights about three weeks out, so didn’t have great transportation options. We ended up taking the RER B from the airport to the St Michel-Notre Dame stop in central Paris, then (after a brief visit to Notre Dame, which was nearly empty at 8 am on a Saturday morning) we rode Line 4 of the Paris Metro from St Michel to Gare Montparnasse, after which we took the TGV train from Gare Montparnasse to Poitiers. In Poitiers, we rented a car and drove to our Chateau B&B near the Abbey. It sounds harder than it actually was, but it was still a multi-step process that took a good chunk of our arrival day, so we were ready to relax when we got to our B&B!

**If we had booked farther ahead, we could have taken the TGV directly from the airport (Terminal 2) to Tours, which is much closer to the Abbey than Poitiers.  However, the TGV was sold out from CDG and I couldn’t find an available rental car in Tours; one of the pitfalls of booking last minute!**

We arrived at Château de la Roche Martel in the late afternoon, and were given a brief tour then shown to our room. The historic property was built in the early 1400’s and has an addition from the 1600’s. It’s a historically quirky place and the owners, a Viscount and Viscountess, are careful to share that it is not a luxury hotel (no A/C; does have private bathrooms) but rather a privately owned chateau where they are delighted to welcome guests. I spent a relaxing couple of hours enjoying the garden on a chaise with a good book, and found myself wishing we had booked more than one night. Next time!

The view from the garden at Château de la Roche Martel

Our hostess offered to make us a dinner reservation nearby, and she recommended the Restaurant Le Montsorelli  on the terrace at the Hotel Le Bussy. 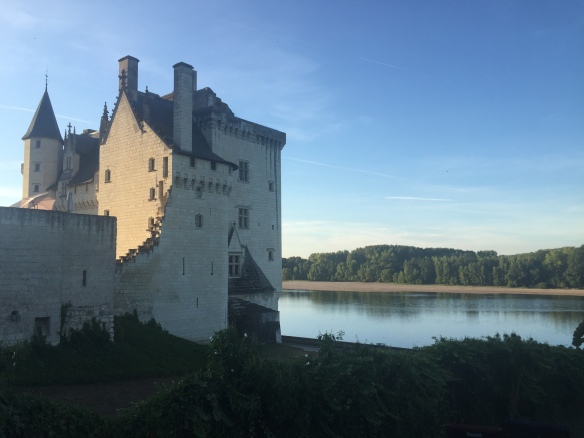 Our view during dinner at Le Montsorelli

Watching the sun set over the Loire River, next to the Chateau Montsoreau, while dining in the garden of the restaurant, was the perfect beginning to our French adventure! 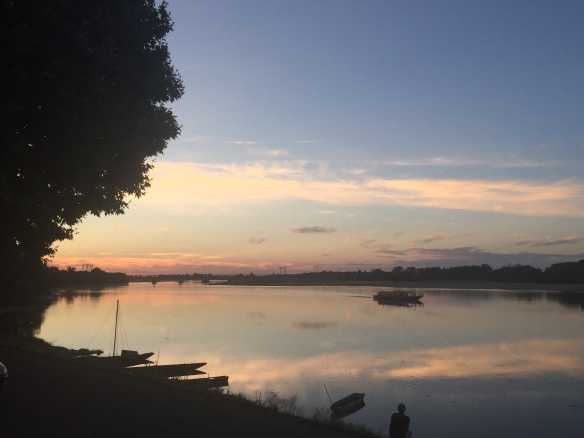 Sunset over the beautiful Loire River

At breakfast the next morning (the food was AMAZING, wish I had taken a photo), my husband, son and I shared a fascinating discussion of US politics with our hostess, a retired couple from New Zealand and a young couple from Moscow (one of the best parts of staying at a B&B is the fellow guests that we meet).  After breakfast, we packed up and headed out to the Royal Abbey of Fontevraud.

Founded in the 1100’s and now the largest remaining monastic city of the Middle Ages in Europe, Fontevraud housed, in four separate priories, monks, nuns, women who retreated here after the deaths of their husbands (as did Eleanor of Aquitaine), and a hospital for lepers, all overseen by an Abbess.

Originally in an area of France belonging to the King of England, the English royals were great benefactors of the Abbey (hence the distinction The Royal Abbey of Fontevraud). Eleanor of Aquitaine, a complex and strong woman way ahead of her time, struggled with the constraints placed on her because of her sex. She was the heir to Aquitaine, but as women were thought unfit to rule by themselves, she was married off at age 13 to the future King Louis VII of France. After 15 years of marriage during which she only gave birth to two daughters, King Louis annulled their marriage and she then married King Henry II of England, who was eleven years her junior.  She had eight children with Henry, including King John and Richard the Lionheart. After Henry died, she spent the last 20 years of her life at the Abbey, and is buried there with Henry II and Richard the Lionheart, as well as King John’s second wife, Isabella of Angouleme.

Eleanor of Aquitaine and her second husband, King Henry II of England

After the French Revolution of 1789, the monastery was dissolved and the last Abbess was evicted in 1792. Napoleon turned it into a prison in 1804, in which capacity it served until 1963, when the French Government restored it, opening the Abbey to the public in 1975.

As we wandered the grounds and explored the buildings, it was easy to imagine the life of the nuns, going about their daily routines of work and prayer in silence. Did you know they went to EIGHT services a day?? The cloisters still exude peace and serenity, and the crowds were minimal, despite it being the height of tourist season. The Abbey hosts cultural performances, exhibits and events throughout the year, and also serves as a conference center with an onsite hotel, a restaurant and casual cafes. 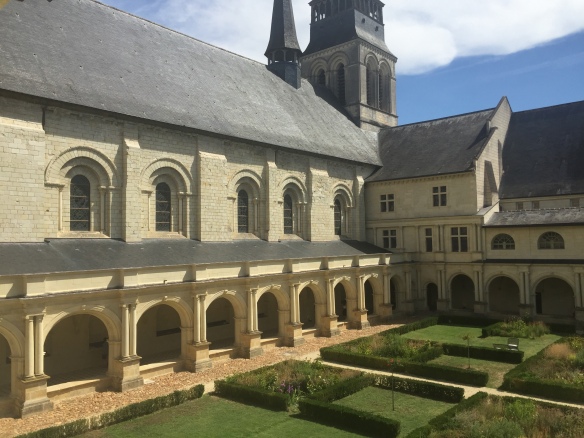 We finally had to drag ourselves away from this fascinating place…but will be back to explore more of the Loire Valley at some point!

2 thoughts on “A Day Out at Fontevraud Abbey (Wednesday Wanderings)”