I’m adding a new post to my Wednesday Wanderings series today. For Mother’s Day weekend back in May, I traveled to Baltimore to spend time with my sister, aunt and cousins. All of our mothers are gone, so we spent Friday and Saturday that weekend celebrating the fact that we had, and are, kick ass moms. We laughed, shopped, chatted, ate and just generally celebrated being together for the first time in over a year. On Sunday, I met up with my son and a family friend in downtown Baltimore for a day of exploring. It was such a fun day!

Me and the boys!

We started late morning at Miss Shirley’s Cafe at the Inner Harbor for brunch. They don’t take reservations, and of course everyone was eating out for Mother’s Day, so we were told it would be a 90-110 minute wait. No worries! We walked a block over to Barnes and Noble, where we spent a lovely hour and a half browsing (and buying) books. I’ve read that due to Amazon, brick and mortar bookstores like Barnes and Noble are in danger, so was happy to do my part to keep B&N alive 🙂 Once our wait was over, we headed back over to the cafe.

Miss Shirley’s focuses on southern food, and does it extremely well. Their menu is extensive, which makes it so very hard to choose. I debated between breakfast and lunch; cinnamon danish waffles were calling my name, but I decided to go with a cup of vegetable crab soup and the jumbo lump crab & corn grilled cheese sandwich. I figured I was in Maryland, so I should enjoy the chance to have crab while I could! I also tried a Shirley’s Crush – the Orange Crush is a Baltimore alcoholic specialty and Miss Shirley’s version was oh so yummy! The service was great and our food was delish; we longingly eyed the dessert menu before deciding that we were just too full to order anything else. If you’re in Baltimore, I highly recommend a stop here for breakfast, brunch or lunch (Miss Shirley’s is open 7am-3 pm). They have three locations, but the Inner Harbor location is handy for exploring the waterfront after you eat!

Afterward, we drove down to Fells Point and walked around, poking into some of the shops and enjoying the waterfront views. Fells Point is an area along the harbor which was first settled in the 1760’s by William Fell, a Quaker, who built a store here. After the ship yard was established, the neighborhood expanded to include homes, stores, and bars. The Fells Point Ship Yard produced over 800 ships, including the Continental Navy’s first frigates and the speedy “Baltimore Clippers”  (Click here for more details). The area was home to seamen, sailmakers, merchants and sea captains. Now a residential area, there is an open air market along the waterfront that has been operating since 1786. It was also the setting for Annie’s house and the pier where she sits along the water in the movie “Sleepless in Seattle”, starring Meg Ryan and Tom Hanks.

One of my favorite activities when traveling is to find hidden, quirky places and things to see.  I dug around on Atlas Obscura and found quite a few in the Fells Point area, so the boys indulged me. “It’s Mother’s Day; we’ll go anywhere you’d like” were their exact words; what great people they are! We found the Fell Family Cemetery, tucked between two townhouses at 1609 Shakespeare St; the “Vote Against Prohibition” ghost sign painted on the side of a building at the corner of Shakespeare and South Broadway; and the Shot Tower, where lead shot was made by dropping molten lead from a platform at the top, forming perfect spheres as it fell into a vat of cold water at the bottom. Built in 1828, the 234 foot high shot tower was the tallest building in the United States until the Washington Monument was completed after the Civil War (for more details, click here)

**Fun fact: Back in the 1910’s-1940’s, companies would pay building owners for the use of their walls, and hired roving street artists, called “wall dogs”, to paint advertising signs on the walls. Now they are fading so have become known as “ghost signs” – there is actually a book titled Ghost Signs: Brick Wall Signs in America** 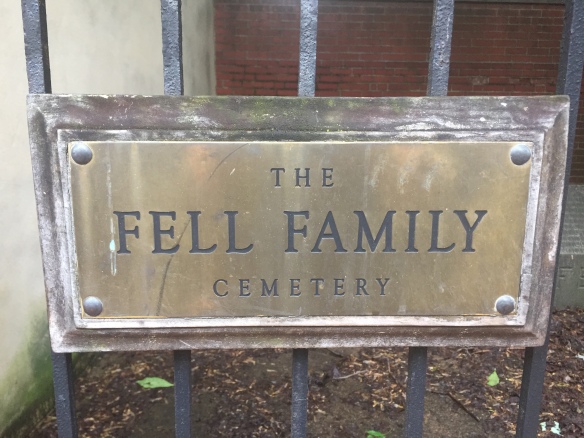 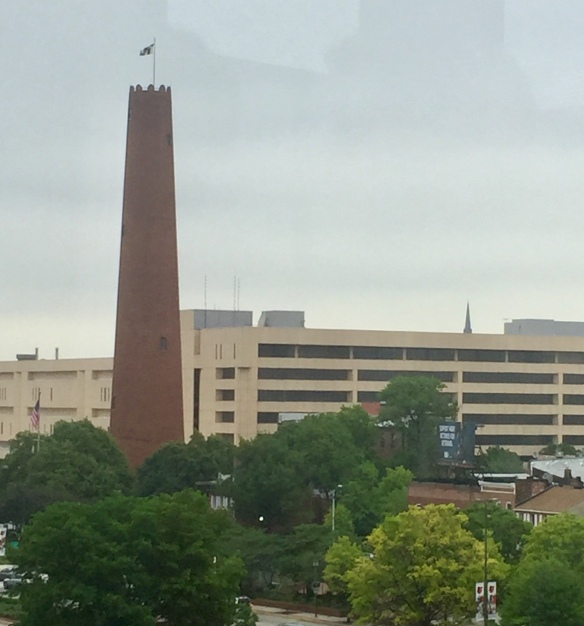 That morning, my husband sent me a text, saying, “Tomorrow is our bulk trash pickup; is it okay if I put our living room out?” Yes, indeed, he put the entire living room into the bulk trash…the rug, sofa, two chairs and ottoman included! After our much-loved sectional succumbed to the effects of boy and dog jumping on it, we had cobbled together an old sofa from my dad and a couple of garage sale/discount store finds as a temporary measure while we hunted for new stuff.  Our “temporary” solution lasted four years; my husband decided that putting it all out in the trash would force us to finally get our behinds in motion and buy a new couch. So the boys and I even did a little couch shopping at Su Casa Furniture, a fun and inviting furniture store.

**Three months later, we still don’t have living room furniture, but we have bought a new rug – baby steps!**

The “temporary” couch – dog approved, but not terribly pretty!

Fort McHenry – take the water taxi out and enjoy the history!  Photo courtesy of Pixabay

The Inner Harbor at Baltimore is a great destination – there are shops, restaurants, free music performances, a huge Barnes and Noble for book lovers, the Baltimore Aquarium, the Maryland Science Center, Fells Point, etc.  A water taxi takes you to various points around the harbor and out to Fort McHenry, bombed by the British during the War of 1812. It was during this battle that Francis Scott Key wrote our Star Spangled Banner; he watched the bombardment from a ship in the harbor. Camden Yards (Baltimore Orioles baseball) and M&T Bank Stadium (Baltimore Ravens football) are very close to the Inner Harbor as well. History, entertainment, good food, sports and shopping; all in all, a fun city in which to enjoy a weekend! 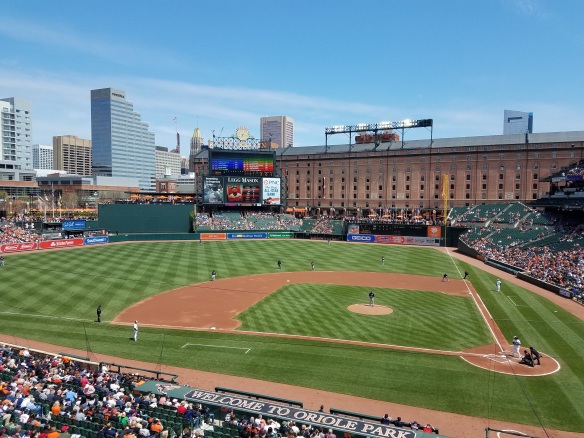 As always, thanks so very much for reading and let me know if there are any places you’d like me to explore and write about!

4 thoughts on “A Day Out in Baltimore”