My youngest spent his first semester in college studying abroad in Rome; I, of course, leapt at the chance to visit him (I did miss him desperately, but ITALY).  We decided to split our time between Venice and Rome, so that we could experience the Acqua Alta, or “high water”, which causes floods in Venice twice a year.

I’m so glad we went in November; yes, it was on the colder side, but we didn’t have to worry about the heat and crowds that I’ve heard make Venice fairly miserable in the summer, and the floods were quite fun to experience. Venice has an ambience like no other city I’ve ever seen, and one of my absolute favorite things to do was wander the back streets away from the tourist areas. I saw a suggestion online to spend one day exploring the islands of the Venetian lagoon, so we added that into our itinerary, and had a lovely day out! 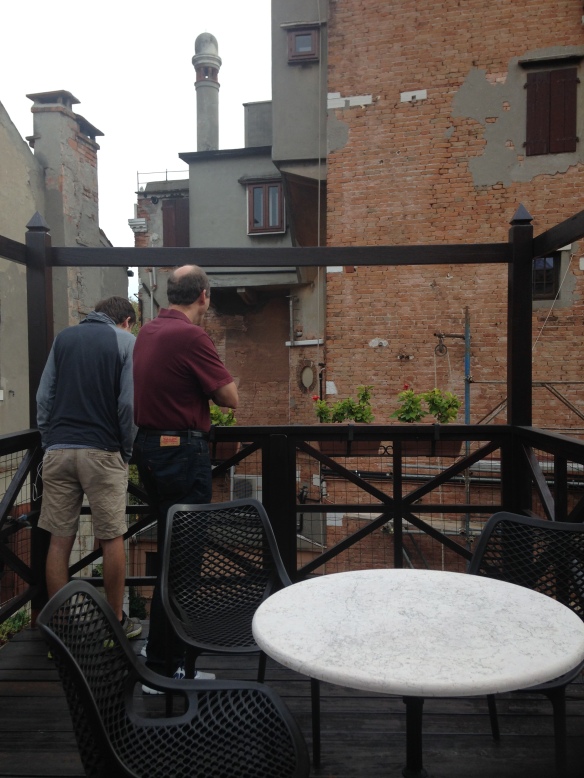 Hotel Campiello, our lodging, was in the Castello sestiere (neighborhood) on Calle del Vin, a quiet back street opening onto a tiny square (or campiello) with an ancient well in the center.  Despite being only a five minute walk from Piazza San Marco, it was supremely quiet and included a yummy breakfast (if you arrive on the weekend, ask for the cappuccinos at breakfast – we were not offered one until Monday, so apparently the weekend server didn’t know/want to make them). I booked the Deluxe Double so we’d have room for our son, and as a bonus we got a private rooftop terrace and an amazing spa shower! Located just a hundred yards from the San Zaccaria vaporetto stop, we could have easily taken the vaporetto around the city to catch the ferry out into the lagoon, but decided to walk so that we could explore back streets and pop in to the Libreria Acqua Alta along the way.

We set out after breakfast, and a few wrong turns later found ourselves at the bookstore, where we spent a happy hour rummaging through the treasure trove of old and new books, old maps, post cards, magazines, etc., piled not just in gondolas but also on chairs, the back patio, and the street in front of the store.

We found the world’s tiniest math book (about 1 inch by 1 inch), which of course had to come home with us as a stocking stuffer for our oldest, who loves math.

** Does anyone else give weird and quirky things in Christmas stockings? Or is it just me?? I once gave my son a tiny little buddha statue because when he was a baby and always smiling, we called him “the Happy Buddha”**

With our purchases in hand, we continued on to the Fondamenta Nove vaporetto stop, where we jumped on Line 12 to Burano. From there, we transferred to Line 9, which runs back and forth between Burano and Torcello.

The island of Murano, with its glass factories, is closest to Venice, but I was intrigued by the island of Torcello, where the original Venetians first settled back in the 5th century as they fled from the Germanic invasion of Altino after the fall of the Roman Empire. The Basilica di Santa Maria Assunta was built in the 7th century and is the oldest church in Venice. An intricate Byzantine mosaic covers the entire back wall of the cathedral; as I studied the astounding artistry I felt a yearning to attend “mosaic school”and learn this ancient craft. We did not climb the campanile (bell tower) but for a small fee you can get beautiful views out over the lagoon 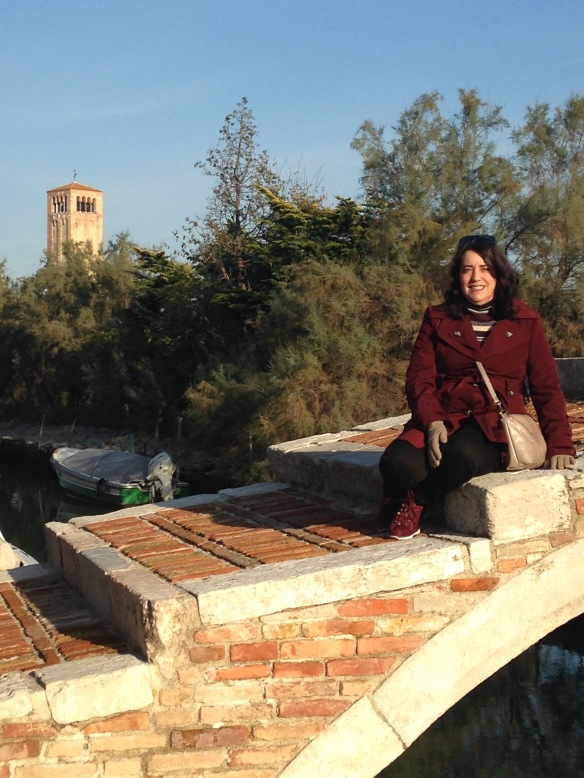 Right next door is the small, round Chiesa di Santa Fosca, a lovely, simple, unadorned Byzantine-style church from the 11th century. If you go, take a few minutes and soak in the peaceful atmosphere of Santa Fosca, the tranquility is calming and the church is beautiful in its simplicity.

There is only one path from the ferry landing to the Basilica di Santa Assunta, so it’s impossible to get lost. There are a limited number of restaurants on the island (I’ve read there are only 10 permanent residents); the restaurant that looked most promising had a sign out front with a cardboard stork and what we assumed was an announcement that the family was enjoying a new baby boy, so we ended up grabbing a coffee and a sandwich at an outdoor cafe before heading back to the ferry for Burano.

Pictures of Burano are all over Instagram these days due to the colorful houses, brightly painted so that returning fishermen could distinguish the houses in the fog that often blankets the lagoon.

Most famous for its lace, we also enjoyed hearing the history of Venetian masks made on the island. I had often wondered about the long nose of the doctor’s mask, and the mask artist we met explained the long nose was designed to keep the doctor’s face from getting too close to the plague victims he examined.

We did a little shopping but didn’t have a lot of time on Burano, so mostly enjoyed wandering this beautiful island before taking the last ferry back to Venice.

I love spending relaxed days just exploring and getting lost in a new place…where are your favorite places to wander? As always, thanks for reading!